Authentic Leadership: Are You For Real?

A while ago, I coached a senior-level executive at a multinational corporation who had a bad reputation within his company.  How bad?  Well, when I interviewed his coworkers and his subordinates, the most consistent word used to describe him was “jerk.”  He was getting business results and hitting the numbers, but those results were coming at great expense to others and to the company.  Morale in his department was at an all-time low, and his team members were leaving in droves.

Clearly, his leadership personal brand was in serious trouble.  Perhaps someone like Donald Trump can get away with that kind of reputation, but most executives who behave in this way are on the short road to ruining their careers.  His future opportunities were going to be severely limited unless he learned how to work more effectively with others.

Yet, when I shared the feedback and addressed the issue with this particular executive, his response was that he was only willing to make a few changes in his behavior.  “I do see that I could probably make a couple of adjustments,” he told me, “but what I feel people want me to do is to be somebody I’m not.”  He planted his feet and insisted that, if he made certain changes, it wouldn’t be “authentic.”  His reasoning, essentially, echoed that old song, “I gotta be me.” 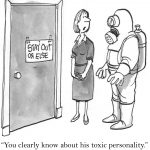 I have experienced this type of situation a few times in my executive coaching practice:  an executive who refuses to make behavioral changes necessary to sustain and grow a promising career.  In short, he wanted to use “being authentic” as an excuse for bad behavior and poor people leadership.

As a next step, I asked the executive to call out for me the characteristics of a great leader.  He was able to easily make a long list of characteristics – indeed, they rolled right off his tongue.  I then asked him to do a self-assessment (on a scale of 1-10) to get clear on how well he actually exhibited those characteristics on a daily basis.  He started into the exercise, paused, then chuckled.  “I get it,” he responded, “there are a few things I should change about myself.”  And, thus began the process of pin-pointing which behaviors that, once changed, would make the most difference in terms of his own capabilities as a leader in his organization.

The truth is that we all know what a good leader is, and we all know what a bad leader is.  In fact, I encourage you to sit down right now, make a list of the key characteristics of a great leader, and do a quick 1-10 scale self-assessment to better understand how well you deliver against of those characteristics.  What do the results tell you?  Of all that you wrote down, what is the one behavior that, if you changed it starting today, it would help you become a far better leader of others?  Share your outcomes with me!  I’d love to hear from you.